Caffeine overdose is very rare, but it is often related to energy drinks or caffeine supplements that can contain very high levels of this stimulant.

Children and adolescents have a lower tolerance for caffeine and a higher risk of overdose than other people.

In this article, we look at official advice on how much caffeine people can consume, sources of caffeine, and treatment and prevention of an overdose.

We also examine what caffeine is, as well as the risk factors, likelihood, and symptoms of a caffeine overdose.

A person is more likely to overdose on caffeine by taking a dietary supplement than by drinking coffee.

Caffeine occurs naturally in certain plants, nuts, and seeds and manufacturers add it to some foods and drinks.

It has a range of effects on the body, from suppressing appetite to making a person feel more awake.

Caffeine is a stimulant, meaning that it increases some of the body’s processes. For example, messages moving between the brain and body can travel faster. This is one reason why a person may feel more alert or focused after consuming caffeine.

Heart rate and breathing may also speed up after someone consumes caffeine. Most of the effects on the body are short term and do not cause lasting harm.

However, consuming a large amount of caffeine can have a harmful effect on the body.

How likely is a caffeine overdose?

A person might find consuming too much caffeine and experiencing side effects to be easy. However, a life-threatening overdose is rare, and a caffeine overdose as a cause of death even rarer.

In a 2018 review of scientific journal articles, researchers identified 92 reported deaths from caffeine overdose. This review included all journals since online databases began. The researchers believe that around one-third of these deaths are likely to be suicide.

In general, caffeine will begin to affect the body if there are more than 15 milligrams per liter (mg/L) in the blood. A concentration of 80 to 100 mg/L can be fatal.

Caffeine overdose is most likely to result from taking a dietary supplement or caffeine tablets rather than from drinking coffee, especially when people combine these products with energy drinks, sodas, or coffee. Supplements increase the risk due to having higher levels of caffeine than foods and drinks.

Unlike drinking coffee, or even taking supplements containing caffeine, using purified caffeine powder is highly dangerous and much more likely to cause an overdose.

The United States Food and Drug Administration (FDA)Trusted Source warns that a teaspoon of powdered caffeine can be equivalent to 28 cups of coffee. It stresses that pure and highly concentrated caffeine products can have serious health consequences.

Feeling restless and anxious are common side effects of caffeine.

The typical side effects of caffeine can include:

Symptoms of a caffeine overdose can include:

If a person experiences any of the symptoms of caffeine overdose, they should seek medical advice. 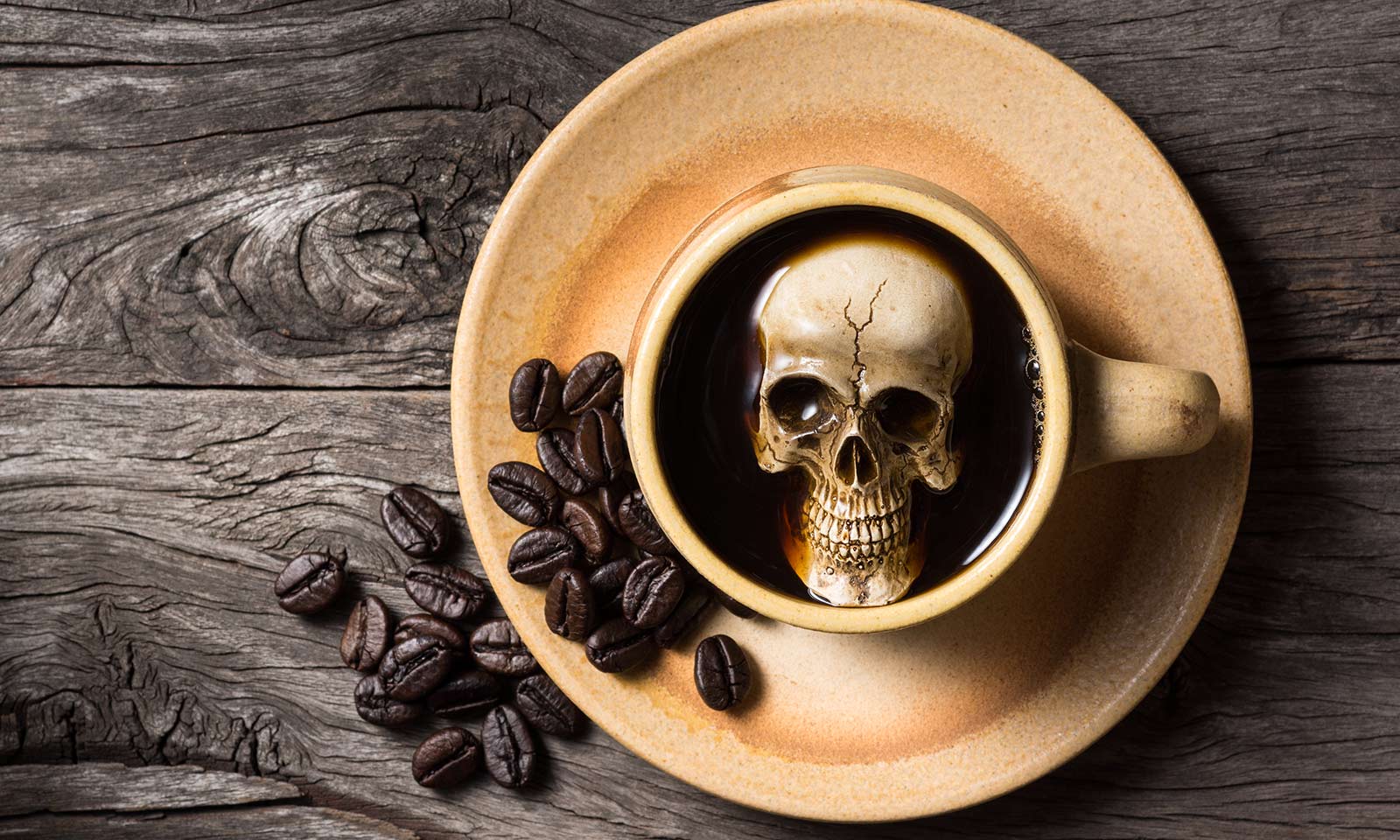 Combining caffeine with alcohol can have several harmful effects.

Alcohol is a depressant, but caffeine can partly mask the effect of alcohol by making a person feel more alert. People who combine energy drinks and alcohol may be more likely to drink to excess.

A fetus or newborn is unable to break down caffeine quickly. The American College of Obstetricians and Gynecologists advise women who are pregnant to limit their caffeine consumption to less 200 mg per day, which is the equivalent of 1 to 2 cups of coffee.

For women who are breastfeeding, the Centers for Disease Control and Prevention (CDC)Trusted Source state that a low to moderate intake of coffee should not affect a baby.

The CDC class “low to moderate” intake as 300 mg per day, which is about 2 to 3 cups of coffee. However, a person should consider decreasing their caffeine intake if an infant seems irritable or fussy.

According to the FDA, the American Academy of PediatricsTrusted Source discourage children and adolescents from consuming caffeine. In particular, energy drinks can contain an unhealthy amount of sugar as well as caffeine.

Caffeine may have more severe effects on a person with an underlying health condition.

Although no link clearly connects caffeine and heart health, people who are more sensitive to caffeine might have heart palpitations and may wish to reduce their caffeine intake.

Caffeine affects people differently, depending on their general health, age, weight, and height. A person who does not consume caffeine regularly may experience its effects in a more pronounced way than a person who frequently drinks coffee.

U.S. government dietary guidelines suggest adults may consume up to 400 mg of caffeine a day as part of their diet. This quantity is equivalent to around three to five 8-ounce cups of coffee.

People can find caffeine in many different products. The most obvious are caffeinated drinks, such as coffee, tea, cola, and energy drinks. Manufacturers also add caffeine to some foods, such as candies, and it occurs naturally in chocolate.

Caffeine supplements are widely available in tablet or powder form. These forms often have far more caffeine than coffee, and people can find it hard to measure how much they have taken.

According to the Center for Science in the Public Interest, caffeine powder can contain between 3,200–6,400 mg of caffeine per teaspoon. The FDATrusted Source warn against the use of these products due to their potential to cause serious health consequences.

The following table, adapted from the Alcohol and Drug Foundation, lists the average caffeine content of some common sources:

When to see a doctor

If a person has any symptoms of caffeine overdose, or if they have taken a large amount of caffeine accidentally, they should seek medical advice.

A person can get immediate advice from Poison Control, a not-for-profit organization that runs a helpline and website to give information on accidental poisoning.

Drinking water to rehydrate may help to treat mild side effects.

A person may experience side effects that are unpleasant but not a cause for concern, such as feeling restless or dehydrated. These side effects will usually go away within 3 to 5 hours.

In the case of mild side effects, a person can take the following steps at home:

A person who has a caffeine overdose may need medical treatment, including intravenous fluids, supplements, or activated charcoal.

Activated charcoal can stop caffeine from entering the gut. If caffeine does enter the gut, an even higher level could get into the blood and cause further health problems.

Regularly consuming high doses of caffeine may cause long-term health problems, including:

For most people, caffeine consumption is unlikely to lead to an overdose or long-term health problems. People who consume caffeine regularly develop a tolerance to some of its side effects. Drinking coffee in moderation may also have health benefits.

Being aware of the amount of caffeine found in food, drink, and supplements can help. A person may therefore choose to have a smaller-sized coffee, alternate regular with decaffeinated coffee, or opt for decaffeinated hot drinks, such as herbal teas.

Caffeine powder and supplements can contain very high levels of caffeine that may be harmful to health. The FDATrusted Source strongly advises people to avoid these products.